The Urban Dream in Latin America

In 1968, Dr. W. H. MacBain, then Director of the Fellowship Foreign Mission Board, received a phone call from South America. The caller, Don Whiteside, wanted to know if the Fellowship was interested in doing ministry in Colombia. The Whitesides, members of Forward Baptist Church in Toronto, had already planted one church in the city of Medellin.

At the same time, two single women, Mary Mejias and Helen Scoble, members of First Baptist Church in Waterloo, had been serving on the northern coast of Colombia for twenty years and also expressed interest in a partnership with the Fellowship.

By 1974, Colombia had a healthy contingent of Fellowship missionaries. In the ensuing years a large piece of property outside of Medellin was bought, a school for missionary children was built and staffed, a training center for national pastors and workers established, a prison ministry begun and new churches planted.

But drug wars between competing cartels, and clashes between government agencies and the drug lords were making personal security a constant stressor. It became necessary to sell the property and move the school and the missionary families to more secure locations in the city. As with the diaspora, the move had divine implications. The security issues had created uneasiness among the middle and professional classes of Colombian society bringing a new openness to the Gospel. The move of our missionaries into the heart of urban life provided a platform from which they could take advantage of these newly opened doors of opportunity.  A new church plant that focused on the professional class was started in 1989, and El Redil (The Sheepfold) was born.

Then the unexpected and the unthinkable happened. Violence spiked. Foreigners, and Colombians who were associated with them, were targeted. With great reluctance the decision was made to remove our personnel from the country until the situation cooled.

Two significant blessings bloomed out of those painful circumstances. The decision was made to divide the Colombia team in two. One part would return to Colombia, the other part would open up a new missionary endeavor in Venezuela. The second blessing occurred in Colombia. In the absence of the missionaries, the leaders of the National Church had successfully filled their shoes. The ministry our personnel returned to was not the same ministry they had been forced to leave. Instead of driving the work, they became mentors and advisors to national leaders and now had the freedom to expand their horizons.

The original El Redil began to reproduce churches in the upper class suburbs of Poblado and Envigado.

Veteran missionary, Phil Webb writes: “In a culture where hierarchical structures have always existed in the church or religious system…to let others progress in leadership has not been easy. Mistrust…is the norm when it comes to releasing others into ministry. Dependency also has been a great hurdle to overcome, but it is very encouraging to see the Colombian church take ownership of its own growth and administration in all of its aspects.” 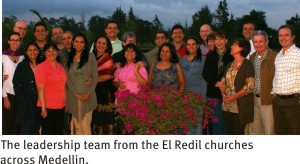 According to Diego Cardona, a Colombian as well as a missionary, all of the association’s churches are led by Colombians. His father, Jaime, led the way as one of the early pastors of that flagship church started by Don Whiteside back before the now famous phone call. Church planting now often happens at the initiative of the churches. The church in Cartagena, for example, has planted two daughter works in the last five years, without any intervention from the mission.

Traditionally, national churches once remained financially connected to the mission. But times have changed. Webb comments: “The mission still offers financial help for new church plants but basically for a two year period. This is usually for personnel working in the new work.”

“Experts” have insisted that churches in a lower socioeconomic group can’t reach higher than themselves, a theory disproved by at least one church. Webb says: “Palmito, one of our poorest towns in Sucre with a pastor who has only high school education has been able to reach the professional people of his town…It also has started works among the native population and helped consolidate two other works.”

The more affluent El Redil churches have become models of care and concern toward others who are not so fortunate. “I have been so impressed with the attitude of our poorer pastors who have blessed and encouraged the Redil churches. The risk the mission took 20 years ago to start churches among the professional people of Medellin has proven very helpful for the Colombian association. The Redil churches give far more to the association than we as a mission ever did,” Webb continues.

Both mission and churches are dedicated to establishing new launching pads for the Gospel. At this time, says Diego Cardona, there are three church planting projects underway, one each in Puerto Viejo, Santa Marta and Sabaneta. As well, there are two other plants under consideration in La Ceja and Barranquilla.

New churches need new leadership and there are new church planting teams in the process of being trained. In Colombia, pastors don’t move from church to church as frequently as their North American counterparts do. This means that pastors must be growing themselves if they expect to lead a growing church. Significant strides have been taken to ensure the emotional, mental and spiritual health of the men and women at the forefront of ministry in our Colombian churches.

Because the national association has accepted its responsibility for the ongoing ministry among the churches and for future growth, people like Phil and Deene Webb have been able to move into other areas of ministry. The Webbs have founded a retreat centre outside of Medellin that provides services to help restore and revitalize the pastors and leadership of local churches. The principles and programs used at the retreat Centre have become useful tools to our personnel serving in other Latin American countries. Other resources have been developed in areas never before taught. For example, teaching and training is available on a theology of suffering in answer to the prosperity gospel, on what servant leadership looks like, and about how to minister to the sexually and relationally broken.

Ministry that pleases God must be outward looking and our Colombian churches have become leaders in the area of social justice. The counseling clinic, Vínculo, unique in Medellin, provides professional help for Christians and non-Christians from all over the city. Abba Father, another unique ministry, reaches out to the relationally and sexually broken of the city. Claudia Cardona, Diego’s wife, has been instrumental in mobilizing the church in establishing a youth centre in Barrio Pacífico that provides for the physical, emotional and spiritual wellbeing of dozens of children in one of the most impoverished and dangerous areas of Medellin.

The Colombian churches are developing another passion, this time for the lost beyond their borders. The El Redil churches want to know how they can begin to have missionary involvement in and outside of Colombia. Where once they received missionaries now, by the grace of God, they want to send missionaries.