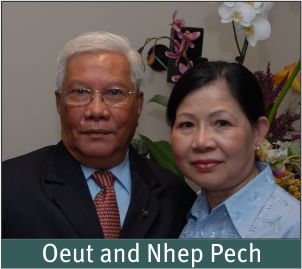 Since 2009, when Oeut and Nhep Pech returned to their native Cambodia under the umbrella of Fellowship International, three churches have been established, hundreds exposed to the Gospel of Jesus Christ, and a unique humanitarian ministry through Nhep’s mobile dental clinic has brought the Pechs, and The Fellowship, to the attention of the Governor of Kampong-Chan Province in Cambodia.

Protestant missions began in Cambodia in 1922 with the Christian and Missionary Alliance. Between 1975-79, during the Pol Pot era, 80% of Christians and almost all Cambodian pastors were martyred. Now, out of a population of 14 million, about 1.5% are evangelical. The CMA, called the KEC in Cambodia (Khmer Evangelical Church) has 236 churches in 20 of the 24 provinces in the country. Other evangelical denominations are also engaged in successful church-planting efforts.

The Pechs are members of Rosemont Baptist Church in Montreal, QC. Both were affected by the atrocities of the Pol Pot years. Oeut’s wife and children starved to death. He emigrated to Canada in 1980. Nhep lost five of her siblings to death squads. She escaped death miraculously on several occasions. They met in Ottawa and were married in 2003.

Nhep is a professor at the Kampong-Chan Regional Dental Training Centre. She currently teaches 150 dental students and since the Pechs returned to Cambodia, she and Oeut have led 29 students to Christ. This kind of ministry is done off-campus as the Director of the Centre is hostile to the Gospel. These new believers are going through weekly discipleship. As part of their dental training, Nhep takes the students out to the rural areas of Cambodia. To date they have treated more than 4,500 patients in 17 villages. The Gospel is always presented. 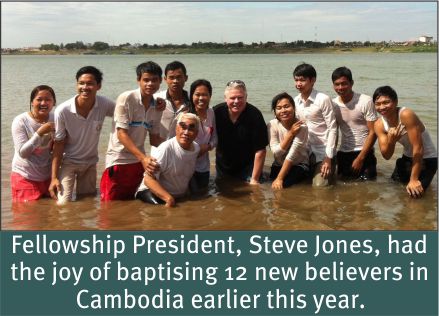 New believers are followed up by the Pechs and a Cambodian pastor. Out of this ministry the three churches have been established along with two other Bible study groups. In taking her students with her, Nhep prays that some of them will catch the vision of ministry in these remote areas where dental service is unavailable. Fellowship President Steve Jones had the privilege of participating in the baptism of 12 new believers in the Mekong River. Nine of these were dental students.

The hostility shown by the leadership at the Training Centre is not present on the level of local government. Nhep and the Governor of Kampong-Chan province have been friends since 1979 and she has found favour in the eyes of all government departments. On a recent visit to Cambodia, Fellowship President Steven Jones had the privilege of meeting the Governor who personally thanked him and The Fellowship for its commitment to humanitarian work. The Minister of Health and Deputy Governor is related to Oeut.

In the town of Ta Neng, the new church plant is the direct result of the dental clinics that come regularly to the area. The Governor gave free land to the church in gratitude for all that Christians were doing to help the poor.

Steve Jones comments: “The Pechs are godly people, highly committed to reaching the unreached and difficult places; motivated to disciple, train and equip the next generation of believers….They desire to empower Cambodian nationals to do the ministry….We must be praying for them and telling their very compelling and endearing story to our Fellowship constituents.”