Another Rescue in Chile

Some months ago, the rescue of Chilean miners trapped deep underground caught the attention of the world. The life saving capsule drilled down into the earth’s bowels and methodically and slowly brought the miners up one by one, embraced by emotional family and a grateful nation.  One of the capsules is on display at an Ottawa area museum. The famous rescue has become an industry.

Another rescue of a different kind is occurring in Chile these days. “For he has rescued us from the dominion of darkness and brought us into the kingdom of the Son he loves, in whom we have redemption, the forgiveness of sin” (Colossians 1:13,14 NIV). Chileans are coming to faith in Jesus Christ like never before!

Originally ruled by the ancient Incas before the conquest of the Spanish in the 1600s, Chile is a country of contrasts.  It has the driest desert in the world and has forty-five hundred miles of Pacific Ocean coast. Advanced mining techniques is contrast with environmental devastation such as widespread deforestation. Religion is deeply embedded in the culture, but rising alcohol abuse and social problems point to a large scale spiritual poverty.

In this challenging context, in the shadow of the Andes Mountains in San Felipe, a new church plant is making a positive spiritual impact. Planted by Fellowship International missionaries Antonio and Hélène Bascuñan, this house church is now bursting at the seams with new believers in Christ. 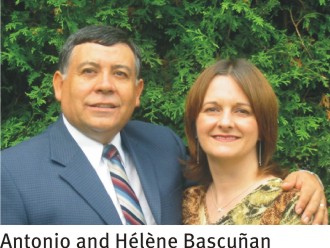 Antonio was born in Chile but left the country as a young man. Political instability had given him a thirst for a new life of better opportunities. Eventually making his way to Canada via Peru, he experienced the new birth Christ offers. As per government policy, Antonio went to Northern Quebec and worked as a mechanic. Soon he met Hélène who eventually became his wife and the mother of their two girls.

Sensing the Lord’s call to vocational ministry, they entered pastoral ministry and eventually felt the Lord’s calling to serve in cross-cultural missions. They spent some years in Colombia and then took an exploratory trip to Chile to see if the Lord would open up a door of opportunity in Antonio’s native land.

Much had changed since he had lived there. While the country had experienced political stability and greater economic prosperity, a shocking spiritual bankruptcy had set in. But God was at work. The Lord clearly led the Bascuñans and Fellowship International personnel to a church. This church sensed the Lord stirring them to plant a church in the city of San Felipe a few hours away. With the significant help of Pastor Heimi and this dynamic church, the San Felipe church plant was launched in that spiritually needy city.

God’s blessing on the fledgling church is evident. Large and small scale evangelistic efforts have led to conversion growth. A most encouraging development has been the intensive discipling of a young Chilean public servant who feels called to pastoral ministry. The ‘house church’ uses the Bascuñan’s living room as their meeting place – and other rooms too! During the summer they can use their outdoor patio and backyard for Sunday school. However with the winter coming, there is simply no more space.

Pray for this church that they may find a suitable building to aid them in being a lighthouse in their community – and as they search surrounding cities for the next church plant.

God is at work in the ‘spiritual rescue’ business in Chile!

Antonio and Hélène Bascunan are church planters serving with Fellowship International in Chile.