The Eternal Connection Between Mouth and Heart 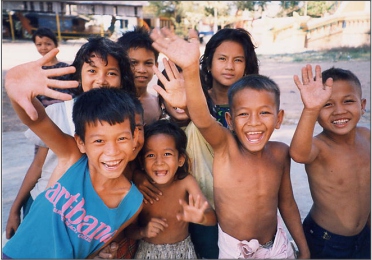 It seems odd to say that there could be an eternal connection between having healthy teeth and gaining a healthy spiritual heart, but in Cambodia that is true. The way to a manÆs heart has proven to often be through his mouth!

Nhep Pech came to faith in Christ at the age of 19, the result of her brotherÆs persistent witness. In 1975, the Pol Pot regime took over Cambodia. Nhep, then a dentistry student, was considered a professional, and therefore a marked woman to a government that considered the ôintelligentsiaö to be expendable. On three separate occasions, Nhep was sentenced to die and on all of those occasions God miraculously spared her life and used her to minister to others in the camps where she was being held. In 1981, after the fall of Pol Pot, Nhep was able to return to her practice as a dentist after completing her studies. Here, too, she was able to witness for Christ as she travelled throughout the poorest regions of the country. Out of those opportunities churches have been born.

Oeut also survived the terror of years in Cambodia under the Khmer Rouge. He and his family immigrated to Canada in 1980 but it wasnÆt until 1990 after being miraculously healed from a serious kidney condition that he realized that all he had read in the Bible was true. In the hospital he accepted Christ as his Saviour. 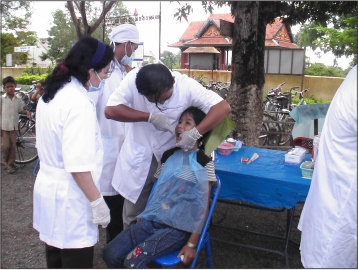 The Pechs, burdened for their countrymen, asked Fellowship International to support them in a return to Cambodia as Finishers* to evangelize using a mobile dental clinic as an entrance into the homes and hearts of the people in the Kampong Cham and Siemreap provinces. Since their arrival in 2007, God has blessed not only their humanitarian ministry but has also established three churches through their witness and exposed hundreds of people to the Gospel.

Let them introduce you to Mr. Thou Chim, one of the many whose lives have been impacted by the presence of Nhep and Oeut Pech.

ôIn 2009, Thou Chim, a young Cambodian with limited resources, began training as a dental nurse in the school where Nhep teaches. We shared the Gospel with him and he began to visit us in order to study the Bible as well as help Nhep sterilize our dental instruments. Thou soon committed his life to the Lord Jesus. He brought his friends to hear the Gospel and several became Christians.

ôSeeing his zeal for Christ as well as his sense of responsibility for his work, we invited him to work alongside Nhep as an assistant in the mobile dental clinic. After his graduation as a dental nurse, he is slated to work at a health center in Chamcar Leu, 50 km from Kampong Cham.ö

The mobile dental clinic has allowed Nhep and Oeut to touch thousands of lives. Since May 2009, when the mobile clinic was started, more than 5,500 patients have been treated and 6,000 toothbrushes and tubes of toothpaste have been given out. Every patient hears the Gospel message. Oeut writes: ôBy GodÆs graceàthere are 331 new believers andàthree churches were planted in Bosknor, Ta NÚng and Bang Her KlÞng.ö

BUT THE ABILITY TO CONTINUE THIS MINISTRY DEPENDS ON FUNDING and that funding is running low. You can help maintain that eternal connection between mouth and heart through your generous contributions to FAIR on behalf of Nhep and Oeut Pech. HereÆs how it breaks down.

Between 25 and 30 patients are treated each week, or between 100 and 120 patients per month. Based on the number of patients treated, this ômouth to heartö project needs: 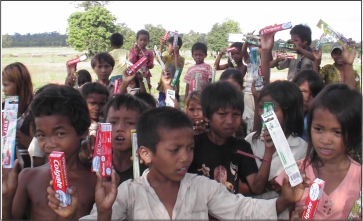 It amounts to $5 or less per patientùpeanuts to us in Canada, yet a whole lot to poor, rural Cambodians. But of far greater value is the impact of this ministry on the human heart. No dollar amount can be fixed to the value of people like Thou Chim, who have come to know Christ because of the ministry of Nhep and Oeut Pech.

This fall and Christmas season FAIR is seeking to raise $20,000 which will help to keep this ministry operating for the next year and a half.á We encourage you to partner with us in this project using ourásecure online site.

The mobile dental clinic cannot continue to function unless we put our money into someone elseÆs mouth by donating to this project through FAIR. It might only be a very short distance between the mouth and a changed heart.

* Finishers is a special Fellowship International program that provides service opportunities for those who are retired.