Even before our Fellowship officially began its international missions program in 1962, the Regular Baptists of British Columbia supported missionaries serving in Japan. These couples were “adopted” by the trans-Canada Fellowship when the B.C. Baptists merged with The Fellowship in the mid-sixties. Rev. and Mrs. Frank Pickering (1950), Rev. and Mrs. Ron Patterson (1960) and Rev. and Mrs. David Slaney (1960) were the beginning before the beginning. 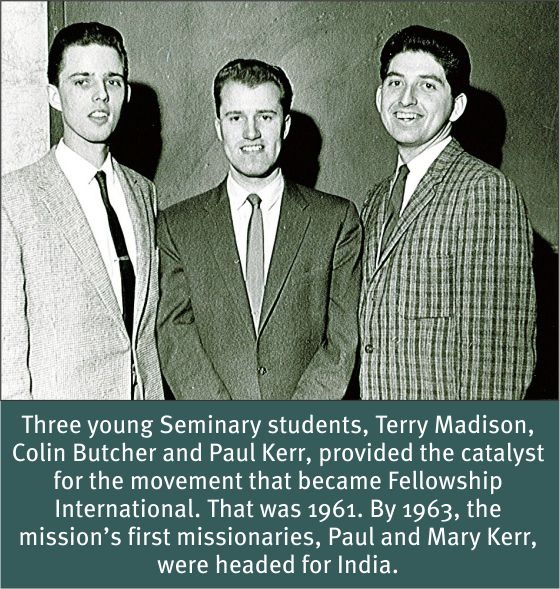 Paul Kerr, Terry Madison and Colin Butcher challenged The Fellowship with their vision to serve in India under The Fellowship umbrella in 1961. In October 1962, the delegates at the annual national convention approved the establishing of a Foreign Mission program. In 1963, Paul and Mary Kerr left for India, followed by the Middletons, the Searles and the Butchers. Hong Kong, Colombia and Pakistan were added during this decade.

By the end of the 60s, the doors to India had closed and a new door was opened to Pakistan. Our story in Pakistan began with the Shikarpur Christian Hospital and Hannah Leutbecher. She was followed by a stream of doctors, nurses, church planters, translators, teachers and administrators, who have worked tirelessly and under difficult conditions. SCH has been a proven lighthouse for the Gospel as it serves the largely-forgotten women and children of Pakistan. Also significant is the ongoing translation of the Scriptures into the languages of the people, headed by Mark Naylor.

While Paul Kerr was in India, he taught a young man by the name of Jack Chen. Forty years after Fellowship personnel were ousted from India, Jack and his wife, Lorraine, would return to India. Jack became pastor of Carey Baptist Church and President of the same school where he had once sat under Paul Kerr’s tutelage. The Chens have enhanced the ministry of Carey Baptist Church by reaching out into the marginalized communities outside their doors. Jack has also provided the catalyst for LeadersFor, a training program for pastors and leaders unable to leave their churches. Thus far, 49 pastors have graduated from the program and new cohorts are either beginning, or in the planning stages.

SWIFT (Summer Workers in Fellowship Thrust) was born in 1972, sending its first team of ten to Colombia. Our first missionaries to Colombia, Neil and Judy Bignall, joined several other already-established missionaries who had been serving there under other agencies. As “Fellowship” people they were delighted to come under the Fellowship umbrella. In the beginning, the focus was on rural areas and among the marginalized in the urban centers. Toward the end of the 80s that focus began to shift to the middle and upper sectors of society. Since then, the El Redil movement (The Sheepfold) has begun several vibrant churches in Medellín and the surrounding area and is planting churches in other parts of the country. An initiative has begun that will train Colombians to become missionaries in their own country as well as in other countries in the world.

In 1973, The Fellowship Foreign Mission Board appointed its first full-time Executive Secretary, Dr. W. H. MacBain. The next year, in 1974, FAIR (The Fellowship Agency for International Relief) came into existence. FAIR has become one of the most exciting ministries of our Fellowship. Not only has the agency provided relief in dozens of emergency situations all around the world, but it continues to provide ongoing support to feeding programs, hospital ministries, orphanages, and reconstruction projects, through the generous contributions of our Fellowship family.

At the end of the 70s, the mission made its presence felt on two more continents: Africa (Nigeria) and Europe (Belgium). Europe would become a focal point of ministry over the following decades.

In 1981, Rev. Robert Holmes assumed the role of Executive Secretary. The first work team, from Emmanuel Baptist Church in Barrie, set off for Toyama, Japan, to build a church. Expansion took place in Europe during this decade with the addition of France, Italy, Austria, Spain and Turkey—a trend that would continue in the years following as Poland and Bulgaria joined the family of nations where Fellowship personnel serve.

In France, humble beginnings in church planting in the environs of Paris have burgeoned into a movement that is now training French missionaries to reach their own people. Innovative ministries in cafés and universities take the Gospel where the people are. When a Disney theme park was built in Val d’Europe, plans began to be formulated to establish a church in the center of that community. Today, in 2013, that new church plant has moved off the drawing board and is becoming a reality.

Years of ministry to the gypsies in Spain, faithfully carried on by Eugene and Liz Ciria, have seen the formation of churches among those nomadic people. New inroads are being made into Spain today with the establishing of a beachhead for the Gospel in Extremadura, in the heart of that needy country.

In 1984, Rev. Paul Kerr became Executive Secretary and David Chapman joined the staff as Administrative Assistant. With so many new missionaries and new countries being opened up in Europe, gathering Fellowship personnel together to minister to their needs provided some interesting dynamics and resulted, in 1986, in the first European Conference, which was held in Beatenburg, Switzerland.

At the end of the 80s all personnel in Colombia were evacuated in the face of the extreme threat against foreigners and the nationals who associated with them. This traumatic experience marked the beginning of a new era of Colombian ownership and leadership and some new beginnings in other parts of Latin America.

When it was feasible for the missionaries to return in Colombia, only half were sent back to that country. The others took up the challenge of church planting in Caracas, Venezuela, opening up another new area for ministry. Wendy MacDonell and Norman Nielsen joined home staff to care for the needs of the growing missionary family. The Fellowship Foreign Mission Board was renamed FEBInternational. Singapore became another place of service during this decade, along with Lebanon. At the end of the 90s, Rev. Richard Flemming assumed the role of Director of the mission.

The 90s also signaled a major shift in focus in Japan.  Since the beginnings of the ministry there, churches had been established on the western side of the country, in Toyama Province. But as this decade dawned, the need to focus on the urban centers in the east became urgent. Inroads have been made in Hitachi, Tsukuba, and Tokyo. The earthquake and tsunami that devastated the country in 2011 brought opportunities and open doors of ministry to Japanese in the areas hardest hit by the disaster.

In 2002, Murree Christian School in Pakistan was shut down after an attack by a group of terrorists. It would reopen a year later. Mark Naylor was appointed Coordinator for International Leadership. In the first decade of the new century, Poland, Bulgaria. Cambodia, D.R. Congo, Kenya, Mexico, Honduras, Chile, Indonesia and Kazakhstan were added to the list of countries served by our missionary personnel.

Though not exclusive to the 21st century, it was significant that many of our new personnel were returning to their native countries to bring the Gospel to their own people. This has been true in Cambodia, Chile, Indonesia, Lebanon and India. In Cambodia, hundreds have come to a saving knowledge of Christ through the doors of a mobile dental clinic and the ministry of Nhep and Oeut Pech. Churches are being established in remote areas in Indonesia through the leadership of Edwin Karwar, and the students he teaches in Manado.

In 2008, Rev. Dan Baetz became Director and the year following, FEBInternational was rebranded and became Fellowship International. Chris Middleton became Global Missions Mobilizer. Short-term missions experienced a revival through creative arts ministries in Central Asia and through Chris’s leadership in the Global Adventures Program at Heritage College and Seminary in Cambridge, Ontario. This program has benefited the outreach ministry of the El Redil churches in Colombia as teams from the school have spend significant time in ESL and other outreach ministries hosted by El Redil.

After a forty-year absence, Fellowship International returned to India in the person of Jack Chen who, remarkably, had been one of Paul Kerr’s students in the early days of the mission’s history in that country. During this decade, and into the second, two couples were called to serve as Member Care Coordinators, providing our missionaries with valuable emotional and spiritual support.

An innovative ministry began in the Democratic Republic of Congo. Richard and Brenda Flemming were invited by an association of Baptist churches in that country to come and train their people to reach out as missionaries into the rest of francophone Africa.

In the second decade of the 21st century, Fellowship International embraced Canada’s multicultural nature by becoming both a national and international mission. Its mandate now included helping our Fellowship churches across Canada to reach the nations who now live within our own borders.

Any listing of accomplishments must carry with it the understanding that none of these would ever have been possible “unless God….” Our story as a mission is hidden in the depths of the Gospel as HIS-story. To God be the glory for all the things HE has done.

The Fellowship has been well served by its faithful messengers of the Gospel over these last fifty years. In many cases the journey has been hard, sometimes with little visible results, sometimes in danger, and often in disappointment. But God has also made miraculous changes in the lives of more people than we can count. Heaven will have to write that story. We thank the Lord for every one of the people who have served, and for the role each has played in bringing His plan of reconciliation to the nations and in bringing HIS-story to a lost world.