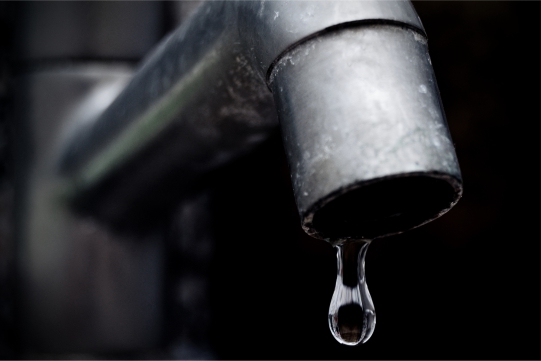 Colourless, odourless and virtually tasteless. Water is easy to ignore—until it isn’t there.

The trouble is, that for most of us, we have such an abundance of it that we have ceased to think about life without it. We turn on taps, flush toilets, fill Keurigs®, bathtubs, swimming pools, and reservoirs with it, and haul enough designer water bottles out of grocery stores to circle the earth several times. We do all these, and more, usually without a second thought.

I wonder what would happen if water bottles were no longer available and nothing came out of the tap except the ominous hiss of air in the pipes? To rephrase an ancient idiom: Absence might lead the heart to ponder.

Every single life form on the planet needs water to survive. The human body contains between 55% and 78% water, depending on size. Humans need between one and seven litres of water each day to avoid dehydration, depending on temperature, activity, humidity, and other factors.

However, in many parts of the world water is not easily accessible, nor is it necessarily potable (drinkable) even when it is accessible.

In Honduras, at Casa Hogar where Fellowship International missionary, Melodie Francis ministers, the absence of water is an issue. FAIR (Fellowship Aid for International Relief) would like to drill a well on the property belonging to the children’s home and provide a stable source of clean water for the forty-two children, and the staff who look after them.

Melodie provided specifics as to why a well is needed at Casa Hogar.

Often the home goes two or three days without any water. Melodie writes: “Imagine how creative we have to be to flush toilets, do laundry, wash dishes, wash your hands!”  The home does have a rain collection system that is useful in emergencies, but dependent on the arrival of actual rain!

Many health issues are caused by the lack of clean water. Hepatitis, parasites, dysentery, have all reared their ugly heads at Casa Hogar.

With help from several of our Fellowship churches and through FAIR, Casa Hogar is blessed with vegetable gardens, a greenhouse, and a bevy of chickens, all of which produce food for the home, and for sale in support of the home. But all of these need a stable water supply and irrigation system to thrive and to allow the home to become self-sufficient.

Casa Hogar has benefited from partnerships with several of our Fellowship Churches in Canada. Through greenhouses, security fences, roofing projects and generators right down to sponsorships for the children, the bonds between Canada and Honduras are strong and precious. Through the well-drilling project these ties will grow stronger and those of blessed with plenty of water will become part of the flow of compassion and generosity that will produce blessing for those who most need to know that someone cares. The goal for the project is $40,000.

Jesus proclaimed that He was “living water” (John 4:10). Casa Hogar is founded on the principle of meeting the physical and emotional needs of children, but on meeting their spiritual needs as well. And, as is often the case, meeting a physical need walks hand in hand with meeting a spiritual one.

You can be part of sharing both physical and spiritual water through your participation in Living Water (Honduras). After all, none of us can live without either.