500 and Beyond: The Legacy of the Protestant Reformation

The 500th anniversary of the Protestant reformation is a good time to reflect on its importance for the church of Jesus Christ today. By the 15th century the church had lost its way on three fundamental teachings: the unique authority of Scripture, justification by faith alone, and the priesthood of believers.

All the major reformers — Martin Luther, Ulrich Zwingli and John Calvin — maintained that every Christian is a priest before God because there is only one mediator between God and humans: Jesus Christ. This was contrary to the Roman Catholic teaching which necessitated the mediation of a priest in order to come to God, in particular for the forgiveness of sins. For these reformers the Catholic doctrine of the priesthood undermined the work of Christ and encouraged a works-based salvation rooted in their sacramental theology.

In addition, all the major reformers heralded justification by faith alone in the person and work of Jesus Christ. We often associate Martin Luther as the first person to come to this belief sometime around 1517 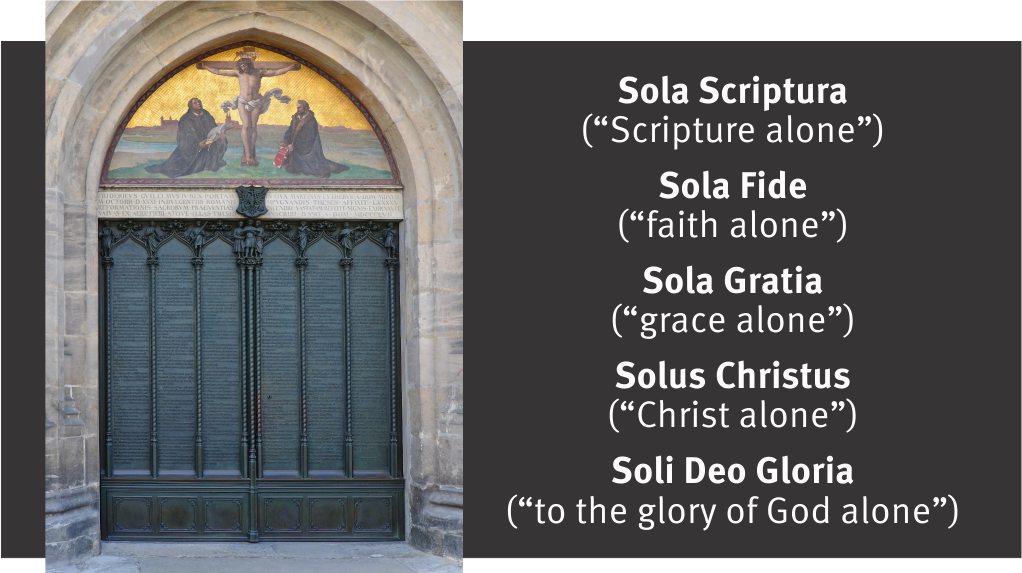 with his nailing of the ninety-five theses to the Wittenburg Castle church door. Luther had been lecturing on the Psalms, Romans, and Galatians for several years prior to this event, and it is likely that he had his spiritual breakthrough and discovery of justification by faith shortly after he wrote the theses. Prior to it, he understood Romans 1:17 to say that the Gospel brought God’s righteousness against us to condemn us. So not only did the Mosaic Law condemn us, even the Gospel did. What he came to realize through his study of Scripture, and Romans in particular, was that the Gospel does not bring God’s righteousness against us but for us. It is God’s free gift to us who are unrighteous sinners in order to make us righteous in his sight. It is God’s grace to us that we might be freed of condemnation and granted his presence forever. It is this effect of the reformation that we usually highlight as most important for us today.

However, as much as I agree that justification by faith alone is an indispensable truth, I believe the most important concept born of the reformation is the one that allowed Martin Luther and the other reformers to come to recognize the other two important truths: namely, the unique authority of Scripture. Luther’s training had filled his mind with a mixture of Scripture and tradition that had developed in the church over centuries, and like the Pharisees of old, the tradition — if not in principle, at least in practice — was their authority. As Luther taught the Scriptures he saw that, though Scripture was given pride of place, it was actually being contradicted by the tradition. This became clearer to him after 1517 when he entered into debates with Roman Catholic scholars. His real break with the Catholic Church occurred at the Diet of Worms in 1520 when he realized the church would never reform because it would never give up its tradition as authoritative, and so essentially undermining the plain teaching of Scripture. The importance of the authority of the Word over all things was foundational for both Zwingli and Calvin as well as all the reformers, including the Swiss Anabaptists Conrad Grebel, Michael Sattler, and Felix Mainz.

In the year 2017, both belief in the unique authority of the Word and justification by faith alone are under attack, often in very subtle ways. This is the modus operandi of the devil to slowly but successfully weaken the church. As a Fellowship of churches and believers, we must be vigilant to constantly make sure that these reformation truths are conscious priorities, not allowing them to be undermined in any way. May the Lord give us courage and strength to stand firm — because it is only through these truths that people are truly saved and the church glorifies our God.

— Barry Howson serves as Academic Dean at Heritage College and Seminary in Cambridge, ON.