This year in Toronto, Fellowship 48 is pleased to present Krystaal.

Krystaal is an award winning, multi-talented group of three brothers who excel in various genres of music including R & B/Pop, Gospel, Urban and World (African).  They are characterized by their tight vocal harmonies and an ability to sing to audiences anywhere in the world.

In 2004, their album ‘Keep on Standing’ was honored with several awards and nominations including: 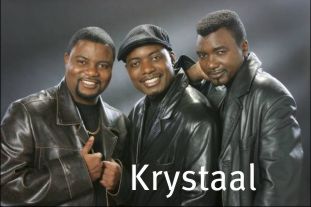 In 2004, Krystaal performed in Tanzania, Africa to an audience of over 100,000 people, a truly amazing experience for the group.  Soon after that, Krystaal toured Belgium, France and England where they were greeted with tremendous responses.  In Birmingham, England they performed at the Baptist World Congress where former President Jimmy Carter was the keynote speaker. Over 14,000 people from 117 different countries attended this event.

In January of 2005, Krystaal was honored to perform with Grammy nominated Fresh IE for a CBC fundraiser,  the telethon which raised funds for victims of the December 2004 tsunami that devastated the Asian coast.

In 2006 Krystaal released two albums and a music video.  With a renewed vision for their work, they also created the ‘Krystaal Peace Tour’ with the goal to bring peace and reconciliation to the African nations.  To that end, they traveled throughout Canada, and on to Switzerland, Germany, Belgium, France, England, Uganda, Nigeria, Malawi and their homeland of the Democratic Republic of Congo.

But before all of the awards and tours, the Lwamba brothers each travelled a long and difficult road.

Their story starts in the Congolese town of Lubumbashi where they were the sons of an affluent government worker and descendents in the royal line of one of the prominent tribal groups.  While they were still in their high school and university years, Mobutu’s despotic regime came into full swing.  In fact, the two older brothers, Michel and Fabian, were leaders of the student protest group and were at the University of Lubumbashi the night that 400 university students were murdered in their beds because they had questioned and disagreed with the government’s actions.

Miraculously, Michel and Fabian escaped from the university that night but during a subsequent demonstration, they were separated and each one had to run for his life.  Michel was able to run with his two-year-old daughter, his young sister and his thirteen-year-old brother Aliston.  They eventually ended up at a squalid refugee camp in Kenya where they barely survived for five years.  However, that is where Michel and Aliston came to faith in Jesus.  Though they didn’t know if anyone else in their family was still alive (including Michel’s wife and baby), they began singing the songs God gave to them. Many refugees were influenced by these two brothers. Finally, through miraculous means, they were recommended for relocation to Canada.  They landed in Saskatoon, SK.

Fabian ended up at another equally despondent refugee camp in Kenya and eventually was transferred to the one his brothers had just left (they had moved to Canada months before, thinking that their entire family had been murdered).  Again, through miraculous circumstances, Fabian found out his brothers were alive and living in Canada.  What an amazing day when, sponsored by a local church, Fabian landed in Canada and was reunited with his two brothers.

They began singing as a way to find healing from their ordeal.

Their story is too horrible and incredible to fit into this one page.  The way that more family was reunited, even though 120 members of their extended family had been murdered in the Mobutu regime, is extraordinary.  The most miraculous event of all is the way that Michel, Fabian and Aliston have been able to forgive for their past and spend their lives praising God.

For the entire story, we recommend that you read Keep on Standing,  the biographical book of the Lwamba brothers and their road to becoming Krystaal.