A Legacy that Lasts 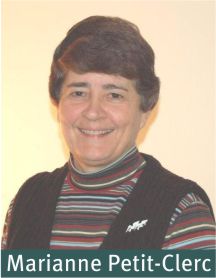 Marianne was born on April 15th, right in the middle of the difficult “war years” in a north-western Quebec hospital.  She was welcomed into the Petit-Clerc family, and eventually they settled in Montreal.  As a young girl, Marianne saw a huge change come to her family when her mother and father were converted to Christ.  The times that followed were tough, and included opposition and ostracism from within their own family, but what a change had taken place!  Gone was the drunkenness and idolatry replaced by the joy of the Lord in that beautiful family!

Marianne herself eventually received Christ during a pastoral visit by Dr. Stuart Gillespie, who was associated with the Grande Ligne Mission.  A few months later (at the age of 12) she completely dedicated her life to serve the Lord during a summer camp at Bethel Bible Institute, Sherbrooke, QC.  Eventually Marianne went on to become a student at the Feller Institute, which was an evangelical school founded in memory of the well-known Swiss missionary – Henrietta Feller (1800-1868).  This was a school that had been founded to give a Protestant education to French Canadian students and Marianne grew in every way in that environment, especially in her relationship with Christ.

After graduation from high school, Marianne went on to work for Bell Canada for ten years as a switchboard operator.  While there, she shared the gospel with many of her co-workers, but she could not forget her call to full-time Christian service.  She bid farewell to Bell in 1966 and went on to train to be a Child Evangelism Fellowship (CEF) missionary, and then spent the summer at the Sermons from Science Pavilion (Expo ’67) during Canada’s centennial year.  Following a year of service with CEF, she sensed that she needed further training and enrolled for three years of intense Bible training at Bethel Bible Institute in Sherbrooke, QC.

Following graduation from Bethel in May 1971, Marianne became a missionary with the Fellowship French Mission with whom she would serve faithfully until her “home going” on August 1, 2011.  Her ministry and life as a missionary were marked by so many things, but above all by the joy and reality of Christ in her life.

Marianne loved the Lord and walked very closely with him, and that love and joy shone through everything she did.  Carole Silvera (her faithful co-worker) testified at Marianne’s funeral that she never knew one single day in all the years they had served together that Marianne missed her quiet time with God.  What an example and encouragement her life has been to those of us who have known and loved her as our sister in Christ!

Marianne’s life and ministry has always been marked by a great love for the souls of women and children!  She and Carole were absolutely passionate about producing Sunday school materials, teacher training materials, books and Christian songs all with the intent of leading others into a growing relationship with Christ.  By God’s grace, these two single missionary ladies have led many to Christ, for which we give God all the glory.  Their efforts were multiplied by the establishment of their very own publishing company (Bërékia) through which their Christian publications have been shared abroad in the francophone world.

Marianne also kept herself very busy as a keynote speaker at women’s conferences, Christian camps, Sunday school conferences and the Word of Life Bible Institute, Quebec.  However she was best known in our Fellowship as a professional translator… that’s Professional with a capital “P.”  Her work was always marked by excellence whether it was a book, an article or even a hymn that she was translating.

What a joy it has always been for me to open up our French hymnbook Célébrons DIEU and to see Marianne’s name there as the translator of such songs as “His Name is Wonderful” (Son nom est merveilleux) and “Search Me O God” (Sonde-moi, ô Dieu).  Praise the Lord.

In closing I do wish that every one of my readers could have been present at Marianne’s funeral service on Saturday, August 6.  The Terrebonne/Mascouche church was full to overflowing with well over 600 in attendance, and the sense of God’s presence was very real.  It was a service in which we laughed, cried and above all praised the Lord for a life that was completely dedicated to Him.  To God be all the glory!

“Only one life, twill soon be past Only what’s done for Christ will last.”